Join us for an evening of spaghetti, songs, banners, crankies and puppets! 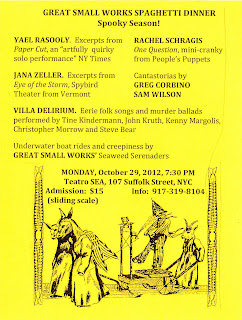 VILLA DELIRIUM
Inspired by eerie traditional folk songs of Germany, Ireland and the Balkans as well as murder ballads of the American South, New York band Villa Delirium writes and performs their own startling compositions, as well as choice covers.
http://www.facebook.com/pages/Villa-Delirium/202478256482598

YAEL RASOOLY, excerpts from “Paper Cut”
The language of black and white cinema is transformed to the “low–tech” universe of paper cut-outs and object theater, creating a tension that is absurd, painful and humorous.

Born in Jerusalem 1983. Yael was trained primarily as a classical singer, and went on to study theater design at the foundation program at Central St. Martins college of Art and Design, London. She began developing her unique theatrical language at the School of Visual Theater In Jerusalem, where she specialized in direction, puppetry and design during four years, graduating with excellence and awards by the city of Jerusalem.  Since 2006, Yael has been creating independent theater work and performing at International festivals throughout Europe, USA, South America, and the Far East. Her solo production Paper Cut has won several International awards and is currently on an extensive tour in festivals worldwide.  www.yaelrasooly.com

"'Paper Cut' is one of those artfully quirky solo performances that make the New York International Fringe Festival worth checking out. . .»
The NY Times, August 23, 2011

JANA ZELLER, Spybird Theater, excerpts from “Eye of the Storm”
The full-length piece will premiere in 2013, involving an elegant woman who is waiting for the return of her sailor son on a shrinking island that faces a storm. She is a rod puppet haunted by shadow visions, and her only neighbors are a set of grotesque hand puppets in their puppet booth.  This excerpt features the two hand puppets Kasper and Gretel as they bang around their domestic obstacles.  www.spybirdtheater.com


RACHEL SCHRAGIS, “One Question
A mini-cranky from the studios of Occupy Wall Street Puppetry Guild

GREG CORBINO, “The Story of Otto Pit-Sling,” a cantastoria

SAM WILSON, “Ned Talk: A Few Questions About the Newest and Most High-End Technology of the Police State,” a cantastoria