PSN dishes it up with German-born curator, Valeska Populoh, who serves up Baltimore flavor with Puppet Slamwich! When Valeska isn’t curating Slamwich or teaching in the Fiber Department at the MICA, she is busy as a cultural organizer and performing artist, herself. In 2011, Valeska co-curated Transmodern Festival. She has also collaborated with Black Cherry Puppet Theater, Nanaprojects, Bread and Puppet Theater and GreatSmall Works. 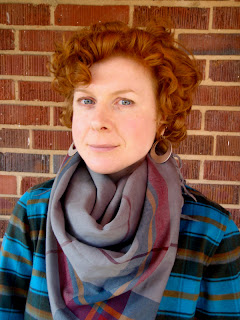 Marsian: How did you enter the world of Puppet Slams?
VP: I have performed at a couple of slams and puppet cabarets, beginning as a human puppet host back in 2006. I have performed at Black Cherry slams in Baltimore and at the Puppet Pandemic when it came to the Puppet Co. in Glen Echo. I am more so involved in the curation of the Slamwich! at Black Cherry Puppet Theater now, trying to build the puppet community (performers and audience) here.


M: Where did you get the idea to host Puppet Slamwich?
Marsian talked me into it.

M: Flattery will get you everywhere with me, but seriously..
VP: No - Seriously. We have a great little puppet theater in Baltimore. There were some folks organizing cabarets and events featuring puppetry for a while in Baltimore - including Maestro Sensational, a kind of puppet variety show that was a big hit.  After some of the artists left town, the shows were no longer happening and people really seemed to miss these puppet performance events, since there was really nothing quite like it in Baltimore.   I was making performances myself that were related to puppetry and had friends in the art community that were equally interested in puppetry.

M: You had mentioned that you traveled a lot and saw the puppet scenes in other cities…
VP: ..like New York, but I had a much smaller community to draw on in Baltimore, so organizing regular shows was tough.  Over the years, I had built relationships with puppeteers along the East Coast through my involvement with Black Cherry, The Puppet Company, Nanaprojects, Great Small Works and Bread and Puppet. Occasionally, a couple of out-of-towners would come through Baltimore - like RPM Puppet Conspiracy from VT and Austin, and we started to build shows around these touring performers.

M: It seemed like when we met at the O’Neill Puppetry Conference in 2010, you  were starting to go in a new direction with puppetry..
VP: We spoke about the scene in Baltimore. You encouraged us to apply [for a Slam Grant] - which we did. And so, by committing to a certain number of dates each year, we really needed to get on the ball with recruiting performers. The first few were tough, since our pool was small. But with time, more and more people who may not even have worked in 'puppetry' before started making work for the slams, inspired by the work they saw. More and more people have gotten wind of the slams, and have approached us about performing here, which is GREAT!

M: What other Puppet Slam Artists are you inspired by?
VP: RPM Puppet Conspiracy from VT and TX is great. Their shows are usually a little bit longer than the average slam performance. They just have a great sense of timing. Their shows tackle serious topics but are always  a riot.

KathyFahey is a lovely performer, too. So different. She creates very short pieces - crankies with paper cut shadows that she unscrolls as she sings.

Porch Puppets (C. Ryan Patterson, Rachel Valsing and Mary Pulcinella) just started here in Baltimore. They are artists and were regulars at our slams and were really inspired by the work they saw and started to make shows. Their most recent overhead projector shadow show was based on the children's story Millions of Cats. The puppets were gorgeous, and the story sweet and funny. 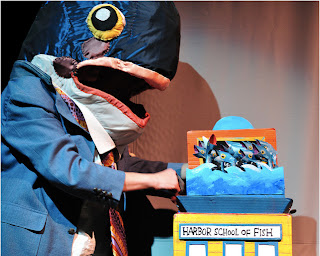 M: What pieces do you have in circulation to perform in puppet slams?
VP: I have a piece called Professor Bluegill and His Harbor School of Fish. I perform dressed in a giant fish head and suit, as Professor Bluegill, and read a cautionary tale to my pupils about the perils of the Chesapeake Bay. The piece is mobile, since the School of Fish is mounted on the back of a bike.


M: Where can people contact you to perform?
VP: causecompany@gmail.com or valeskapopuloh@yahoo.com


M: Where do you see the future of Puppet Slams?
VP: More slams in more cities so that it is easier for people to tour from one site to another. We still need to get better at coordinating our dates with other slam sites, though! This can be tough, since many slams are organized by a volunteer crew of folks with other jobs.  The Puppet Slam Network really helps us get a bigger picture of what is happening along the East Coast in the coming few months!

What advice do you have for Puppet Slam Artists who are just starting out?
VP: Go watch a lot of performers. See what makes people laugh and respond. See what works and what doesn't. Don't be discouraged if your first performances flop or have flaws. Keep performing and making more work and seeing more work and talking to other performers in order to learn and grow!
Posted by Marsian at 10:36 PM