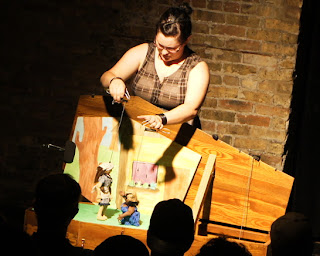 Greetings and salutations, puppeteers and puppet fans alike! Puppet Meltdown has been officially selected to host a puppet slam at C2E2 (that's the Chicago Comic and Entertainment Expo, for the uninitiated)!

So here's the deal: C2E2 is April 13th through 15th at McCormick Place in Chicago, and the slam itself will be held at 3:30 on Saturday, April 14th. So now we move on to the next step: CALL FOR SUBMISSIONS!

Anyone interested in performing at this amazing event contact us through the Sea Beast Puppetry website, www.seabeastpuppetry.com and we'll get you an application form ASAP. March 1st is the deadline for submissions, so get your puppets ready to rock, cause we're taking the comic and entertainment world by storm!!!

The mission of the National Puppet Slam is to recognize excellence in the art of short form puppet theatre. The featured pieces were nominated by their respective slams and then curated by The Puppet Slam Network and the Center for Puppetry Arts. As the largest non-profit organization in the country dedicated to puppetry, the Center for Puppetry Arts is invested in supporting and showcasing the next generation of puppeteers. These performances showcase the beauty, ingenuity, and hilarity of Puppet Slams from all across the country.

The online Nomination Form can be found here: www.puppet.org/perform/nationalpuppetslam.shtml

Requirements for performance:
1. no longer than 7 minutes
2. set up for your act must be completed in less than a minute

We will provide:
1. assistance with travel expenses
2. lodging for up to four nights
3. artist passes for the Cincinnati Fringe Festival
4. CD audio/projector and screen for films

Why do Punch? Well, it's where artists can:
- Try out new material.
- Schmooze and drink with other people who like puppets.
- Get feedback on a piece that needs some work.
- Try out that piece you did for class in front of people who aren't your classmates.
- Get an equal split of the door.
- Try out a piece or scene with puppets even though they've NEVER worked with puppets before in their lives.
- Show a short piece they’ve developed for Puppet Playlist, at the Puppet Lab or at the O’Neill Puppetry Conference to a whole new audience!!!!
- Get a guaranteed $40 at least (courtesy of PUNCH’s puppet slam network grant!)

Perhaps the question to ask is WHY WOULDN'T YOU DO PUNCH?!?
There are only FOUR live PUNCH shows in 2012, so please let us know if you’re interested in any of the upcoming events:

So, think about it. Get back to me. Pass this on to other artists (puppet or not) who you think might be interested.

If you would like to submit an open call for the Puppet Slam Network, please contact puppetslam@mac.com with the details.