Christine Papalexis Has Created A Monster! (Puppetzilla #LA that is)

Christine Papalexis is the president of the Los Angeles Guild of Puppetry and curator of Puppetzilla Puppet Slam in Los Angeles. Christine works in the film industry with special effects and puppetry.

Marsian: So you are hosting a mini-Puppetzilla this weekend..
Christine Papalexis: The Los Angeles Guild of Puppetry is co-sponsoring it with the LA 3-D Club. They are providing the space and 3-D puppet films, we are offering 3 puppet acts in a theater in downtown LA.


M: Tell us about the other puppet slams you have hosted..
CP: I love Puppet Slams - we have held them before, at CIA in Burbank and we regularly have shows/parties at Bob Baker Marionette Theater for our holiday party. This is our first as Puppetzilla Puppet Slam, hopefully the first of many.

M: What other puppet slams have you performed at?
CP: I first performed at Potpourri in San Francisco in 1993. Sort of like a slam.

M: Where do you say LA fits into a slam circuit?
CP: I've been to Adult Puppet Cabaret in San Diego produced by Bridget and Iain.  I would love to go to the one in Arizona but it's not that close... 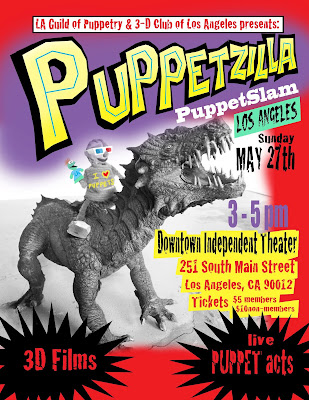 M: I heard there is a new slam starting in Vallejo, called Slammed Puppet Night at the Forbidden Cabaret. It seems like it would be a bit of a drive, but I would include them too. Also, the Adult Puppet Slam in Phoenix often flies in an act.

M: Why do you think Puppet Slams are important? CP: They provide opportunities for raw creative expression.

M: Where would you like to see the Puppet Slam Network in the future?
CP: Puppet Slam Network rocks! A force of support, financially and as an internet presence, both of which are extremely important for the future develop of promoting the art of puppetry. At the last National Festival I was amazed at how much new work was being performed every evening, much of which was supported by PSN. As President of the LAGOP I am always looking for ways to bring in new members and to make sure we are fulfilling our Mission Statement of bringing the art of puppetry to Los Angeles. We would like to provide a stage for people to perform their puppetry.

M: What advice do you have for up and coming slam artists who are just starting out?
CP: Keep working!

M: Puppetzilla Puppet Slam happens this Sunday at the Downtown Independent Theatre in Los Angeles for more details, check out their invite.