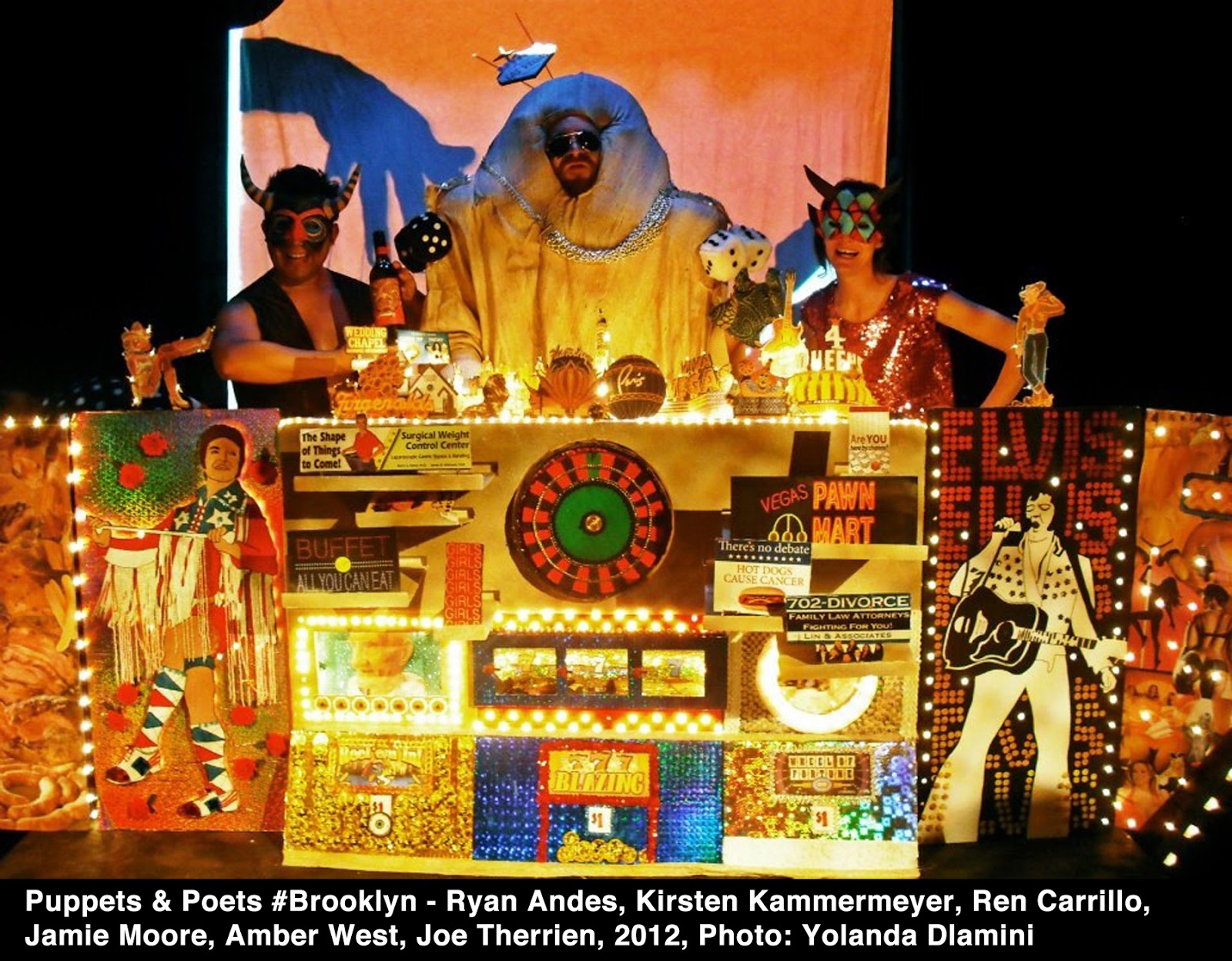 Austin Puppet Incident #Austin
The Austin Puppet Incident is a joint creation of Glass Half Full Theatre and Trouble Puppet Theatre Company to highlight short works of puppetry for adults. We encourage artists to participate in our reciprocal model, in which artists work with and for each other in a variety of pieces. We welcome local performers as well as visiting artists.

Beady Little Eyes Puppet Slam #Portland
Our slams are hosted by a variety of Portland icons. We encourage texting in risqué comments to the hostess.  We keep it fast-paced and rowdy with beer flowing in the back of the house.

Blood From a Turnip #Providence
Blood from a Turnip is a puppet salon that offers professional puppeteers and those new to the art form an opportunity to present big stories, in miniature. Co-curated and hosted by Vanessa Gilbert, David Higgins, and Boston-based video ventriloquist Evan O’Television, BfaT continues to redefine itself, but refuses to grow up.

Café Concret #Montreal
Café Concret is a soirée of experimental puppetry, object theatre, and other media accompanied by a warm meal and live music in Montreal. In a city with a large and active puppetry community, too-often separated into anglophone and francophone audiences, Café Concret is the only informal and bilingual event for short-form object performance by a mix of emerging and established artists.

Forbidden Puppet Cabaret #Vallejo
Forbidden Puppet Cabaret at the Fetterly Playhouse presents evenings of short puppet acts in a cabaret atmosphere, with both café tables and theatre seating.  Food, drink and a puppet craft project with a chance for audience members to get up on stage with their new creations are all part of the experience.  Live music compliments acts during preshow and intermission.

Fussy Cloud Puppet Slam #Seattle
Fussy Cloud Puppet Slam is an ongoing series of puppet variety shows for adults featuring selections of short works from puppeteers in Seattle and beyond. We strive to offer a professional structure where artists may present a wide selection of innovative and experimental works as well as previously developed and refined pieces.

Great Small Works Spaghetti Dinner #NYC
Spaghetti Dinners are thematic evenings presented in cabaret format, offering plates of home-made spaghetti and a healthy roster of puppetry and live music.  Semi-nomadic, each is a unique, one-time-only event and designed to the scale of the venue, from grand spectacle in Judson Church’s vast sanctuary to intimate work at Teatro SEA’s 99-seat theater.

The Late Night Puppet Slam at Dragon Con #ATL
Join Dragon Con’s very own puppet ambassadors, Bob and Carl: The Sci-Fi Janitors, as they present a variety show of adult geeky puppet acts. It is the biggest geekiest puppet slam in the world!

Nasty, Brutish & Short: A Puppet Cabaret #Chicago
Nasty, Brutish & Short is an evening of contemporary short-form puppet and object-based theatre for adult audiences. The cabaret is a low risk environment for artists to perform new and experimental work and foster artistic exchange between puppet artists of different generations and mediums. 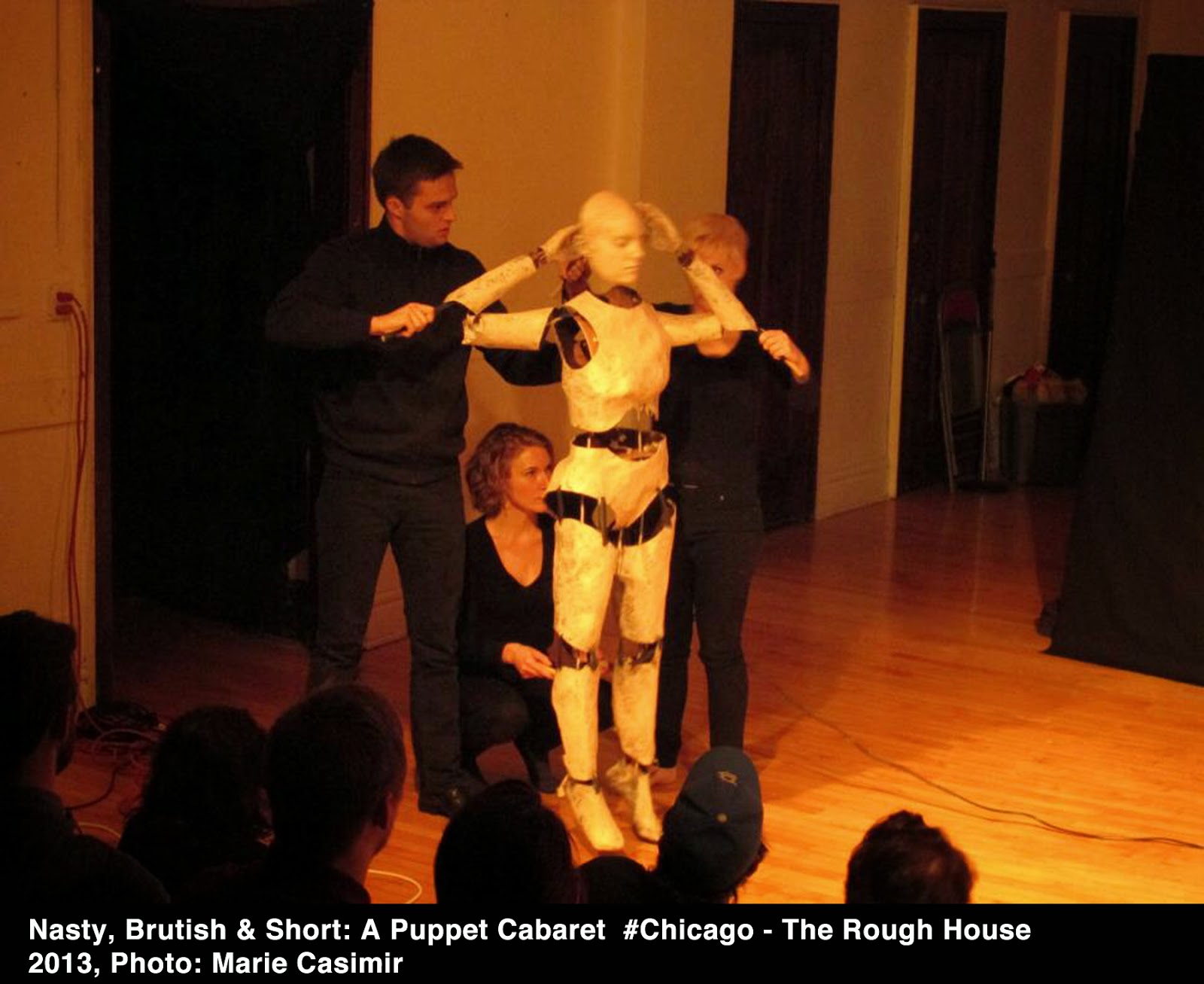 The Puckin' Fuppet Show #Atlanta
The Puckin’ Fuppet Show is an open mic puppet slam for puppeteers, as well as a welcoming atmosphere for newcomers to puppetry. Cash prizes are awarded for 1st, 2nd, and 3rd place as voted on by the audience.

Puppet Meltdown #Chicago
Sea Beast Puppet Company presents Puppet Meltdown, a roaming cabaret that caters to audiences in both Chicago and the surrounding suburbs. Puppet Meltdown travels around the city bringing puppetry to the fleece-hungry masses desperate to satisfy that rumbling in their tummies for the unusual and unexpected.

Puppet Pandemic #NYC
This showcase of works explores the infectious nature of puppets! From marionettes to papier mâché mayhem, puppeteers breed new strains of creativity and present them to an audience of willing test subjects. Watch as artists redefine conventional notions of puppetry. Like a pandemic, the passion for puppetry is spreading. The only cure - a dose of puppet performances!

Puppet Playlist #NYC
Puppet Playlist is a quarterly slam in New York. Each Playlist has a musical theme (e.g. Tom Waits, Johnny Cash). Puppeteers create original pieces based on the theme, and musicians play interpretations of songs by the chosen artist. This mix of puppetry and music had attracted a wide audience, many of whom have never attended a puppet slam.

Puppet Showplace Slam #Brookline
The Puppet Showplace Slam is the longest running slam in the USA. As part of Puppet Showplace Theatre’s “Puppets at Night” series, the slam provides Boston-area adults the opportunity to experience the power of short-form puppetry in an intimate setting. The slam also encourages professionals, amateurs, and emerging artists to create new puppetry works in diverse and experimental styles.

Puppet Slamwich! at Black Cherry Puppet Theater #Baltimore
Puppet Slamwich celebrates puppetry for adult audiences in all of its forms, from traditional to experimental, as well as related genres, such as vaudeville, cabaret, toy and object theater. Puppet Sandwich hopes to introduce audiences to a broad array of puppetry, welcoming emerging and established artists from the Mid-Atlantic Region and beyond.

Puppets Up! Cabaret #Almonte
An adults-only evening of short form puppetry just a stone’s throw from Canada’s capital.  Local, national and international puppeteers, both established and emerging artists, are featured in acts that range from bawdy to absurd to sublime.  Finished pieces, works-in-progress, and works that will never again see the light of day are all enthusiastically welcomed.

Roast of the Calacas: A Puppet Slam #FortLauderdale
Roast of the Calacas cuts to the bone as an uncensored blitzkrieg of puppet mayhem. Hosted by bawdy blacklight skeleton puppet “Mr. Bones”, The Roast is a pumpkin spiced cocktail shaking together B-Horror flick rejects, zombie fetishists, skeletal burlesque and sideshow freaks.

Spork In Hand #Columbia
Spork in Hand Puppet Slam is a celebration of Southern puppetry that is off-the-beaten-path. We amaze, entertain, and inspire the people of Columbia with gloriously gritty evenings of experimental short puppetry and object theatre performances.

Wham, Bam! Puppet Slam #Asheville
This is a night of short form puppetry for adults, and promises to be a fun time had by all. We are very excited about the opportunity to share such a fun and transcendent art form with Asheville.  Puppetry is not just for kids, it can be moving, hilarious, risque, heart breaking, taboo, thought provoking, and sincere.

Winnipeg Puppet Slam #Winnipeg
Winnipeg is known for having eccentric and creative citizens and the puppeteers are no exception. The Winnipeg Puppet Slam features new innovative short works of adult-themed puppetry and object based theatre from local and international artists.
Posted by Marsian at 10:10 AM 2 comments: