Alexander Winfield is a Bermudian-born puppeteer and theatre maker who worked as a freelance puppeteer for six years in Canada. He recently made the move to London to complete an MA at the Central School of Speech and Drama and continues to perform at festivals, theatres, and puppet slams around Europe. With Cryptid Theatre he recently helped host the first Pirate Puppet Cabaret at the Battersea Barge. He has a fondness for dreams, nightmares, the surreal and the stranger corners of human life. 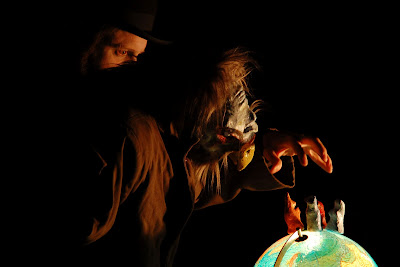 Marsian: What is the funniest, freakiest, edgiest, or weirdest  piece you have seen?
AW: The Left Hand of Frank by Frank Meschkuleit, a fellow Canadian: it’s essentially a one-man cabaret show and is alternatively hilarious and thoughtful. I’d also have to mention Famous Puppet Death Scenes, by the Old Trout Theatre in Calgary.

M: I love the Trouts! I performed with them at the Dolly Wiggler Cabaret..
AW: No one seems to have heard of them here, but the show is a tour-de-force of puppetry styles, full of variety and humour, as well as several truly moving pieces. With lots of Puppet Death.

M: What was the worst puppet slam you’ve been to?
AW: I can’t say I’ve ever been to a disastrous Puppet Slam, sorry! One slam I did attend was a bit awkward: it emphasized audience participation, insisting space be left for the public to contribute to the work. Unfortunately it underestimated the audience’s bravery, leading to long passages of awkward silence!

M: Is there a slam circuit around London?
AW: One of the advantages of London is that it is so very close to so many places. Europe is full of puppet festivals (not quite slams, but still), and with a bit of planning you could fill a year with touring. Little Angel does host puppet slams, though it calls it a scratch night: the Hatch festival. Everything is a festival over here, makes it sound proper. The Tara Arts Studio, in the south of London, has hosted Puppetry Snax, a slam/scratch night produced in collaboration with the Puppet Centre. The Puppet Centre and the Battersea Arts Centre is also known to host slams/festivals that are puppet friendly.

M: Interesting that they call them “scratch” nights in London - sounds itchy. We have have Pandemics here.. Tell us about a fabulous failure and what you've learned from it.
AW: I’ve learned to be wary of improv, and of audience participation. You can meet an audience, bring a puppet to them, but relying on them to supply half a story is dangerous, and in any case it’s probably unfair to charge a person a ticket price if they’re doing half the work.  I saw an improv act kept asking the audience questions about where to proceed next – it was difficult, and the audience were getting tired of it. I learned that while improv with puppets can be exciting, it’s always important to present ‘something’ to an audience, and to make the interaction feel like part of the show rather than work asked of them.

M: What pieces do you have in circulation to perform in slams?
AW: I have All Hail Ye Mighty Lords of Nowhere,  a post-apocalyptic puppet show that I’ve described as William Blake meets Punch and Judy. Two demons are all that remain on the earth, and realize that by wiping out the human race they annihilated all chance they have of ever having fun again. There is The Man Who Lived in the Road about a man who wakes up in the middle of a road with no memory of who he is or how he got there. With no other humans about, he learns to live a life of loneliness.

M: That kinda hits close to home. Anything else?
AW: Then there is Horus the God, about the Egyptian god Horus, now retired and living in a council flat.

M: What inspires you to create a puppet slam piece?
"Inspiration can come from many sources: a banal occurrence seen while walking home, a dream, a piece from a history book. Who knows? Inspiration is a funny beast."

AW:  In Malaysia they call artistic inspiration ‘agin’, meaning, literally, ‘the wind’ It can drive a man to make miracles, but if neglected it can drive an artist mad, it can eat him alive from the inside. So perhaps that’s the answer: I don’t want to be eaten alive.

M: Why do you think Puppet Slams are important?
AW: Puppet slams provide a space where beginning puppeteers can suck with permission. No live performance can have its kinks ironed out without test trials before a live audience, and slams allow puppeteers a space to hurl themselves at the public, and feel what parts of a show work and what parts do not. Puppet Cabarets will continue parallel to the rising popularity of live puppetry – and help to spread a love of puppetry to new audiences.

M: That's lovely! And what advice do you have for up and coming slam artists?

M: Anything else we should know?
AW: I have a strange fascination with Cephalopods, and would love to do a show featuring a giant squid (one of the great marionette performances on film belongs to the giant squid in 20,000 leagues under the sea!). Other than that, expect the unexpected, and always bring an umbrella wherever you go.