Enda O. Breadon curates the Kolohe Puppet Slam in Honolulu and has worked as an actor, director, movement coach and playwright across the United States and Europe.  As a teaching artist in creative drama, Enda employs both clowning and puppetry.  His lifelong love of puppets has led him to include them in a number of shows that he’s written and directed.  While living in Atlanta, he was mentored by Clint Thornton and Spencer Stephens, who he met at the Center for Puppetry Arts. Enda briefly studied puppetry at the University of Hawai’i. 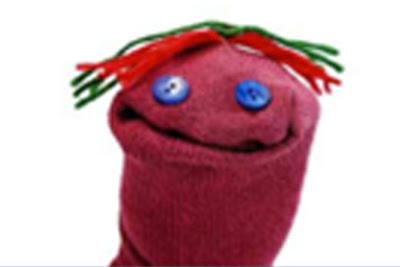 M: Is Honolulu part of a slam circuit?
EB: For all practical purposes, the answer to all of that is “no.”  There’s a really great, fairly new burlesque troupe here in Honolulu, Cherry Blossom Cabaret.  Last October Chinatown hosted Hawai’i’s first ever fringe festival and there’s a new, unnamed clown/physical theatre workshop that is about two months old, so there’s a young art scene with a lot of chance for overlap that hasn’t fully materialized as strongly as I feel it is about to.  And in fact, it was a connection through Cherry Blossom that we were able to get a new location for the slam this month.  I’m told some of the Cherry Blossom dancers will make appearances in slams/cabarets on the west coast, particularly the Bay area.  But most local artists don’t think in terms of circuit because this is an expensive rock fly on and off of - San Diego is as close to New York as it is to Honolulu.
M: Dang!
EB: And while our economy depends on it, the idea that this is place is some kind of theme park in the middle of the ocean, doesn’t encourage artistic interaction.  We’ve seen a lot of people come out here, give a half-ass performance because they really just want to be on vacation and then book it out of here.  Because of what we get from national performers some people here really believe we are a “less-than” destination artistically and there are others that look at what we get from the outside and have a really low aesthetic bar – it’s a cycle.  That said, there have been some really great performers who have come through and some promoters doing yeoman’s work, but they are in the minority.   I hope both Kolohe Puppet Slam and our fringe festival become a destination for West Coast artists and are part of encouraging local artists to start thinking in terms of a circuit and getting their work out there.  But if it happens it’ll probably take some time.

M: Tell us about a fabulous failure and what you've learned from it.
EB: Well, just this week I feel like I’ve experienced one of my biggest failures to date.  Between what felt like the great success of the first slam in February, I ran into some problems.  As I’ve said, I just directed Inspector General for TAG, a show with live actors and two different kinds of puppets that play minor characters.  Literally, the night Inspector opened several of TAG’s board members complained that sock puppets have no place on the TAG stage and are “not to the quality of what we do.”  The poster and all the promotional material used had the sock puppets to promote the show, but apparently that somehow got past the attention of some board members.  And they apparently hadn’t talked to the Artistic Director, who’d been talking excitedly about the puppets for around six months before the show ever went into rehearsal. At this point, I must take pains to again thank Brad Powell, TAG’s Artistic Director.  He went to the mat to defend both the puppets in Inspector and to defend the slam to his board.  But after some of the longest days I’ve ever experienced, it was clear that it was not in the best interest of the slam or of TAG to hold a puppet slam at a theatre where there were hostile board members.

M: So I guess we won’t be seeing the Lion King or Warhorse at TAG any time soon…
EB: The stress and potential for unhealthy resentment abounded.  But I’m trying to stay positive, I went to a hippy-ish Franciscan-nun-run elementary school.  I wish TAG nothing but success in their puppet-less future.

M: ::Sigh::
EB: A friend and fellow artist here in Honolulu gave me a “buck up” talk the other day saying that this was a lesson about focusing on the kind of work you want to do and making your own opportunities.  I guess that’s as good as a lesson as any.  This is all just in the last week, maybe after a few months of reflection I’ll have a real good perspective about what the moral of this tale is.

Again, if there are other curators who have walked through similar experiences please, please, please email or call me.   I’d love to hear how others handled it so I can properly reflect and learn from the situation.

M: Please post that on our Facebook page, a great place to dialogue with other slam organizers… Why do you think Puppet Slams are important
EB: For me, puppet slams are all about 2 things: 1) getting a chance to workshop your material and 2) experiencing the other puppeteers in your community/circuit.  We all know that not every idea we have is worth pushing to a full piece, that some of the best pieces need a lot of work to get good, and that pieces are awesome as short pieces.

We also all know that getting to interact with other artists fills-the-well and motivates us to do more and better work.  The proverbial rising tide raises all the proverbial boats until the sailors puke over the proverbial sides.

And to a much lesser degree, it gives people a chance to see artists grow through their career in the same way music fans like to talk about the difference between an early album/show and what a band is doing in their 40s.  I think what Patton Oswalt is doing with the Comedians of Comedy is pretty much the same thing we’re trying to do with slams.

M: What motivates you to create a puppet slam piece?
EB: The same sick thing in my soul that got me kicked out of class almost every single day of my elementary, middle and high school career.

M: Which slam artists you are inspired by?
EB: I’ve already mentioned Nicole earlier.  Her ideas and enthusiasm are inspiring.  My friends Gregg Van Laningham and Qate Bean have some characters they’ve been working on the Atlanta puppet slam circuit that are apparently illicit in the slams and yet they get requests to do them at the kid’s birthday parties too.  So while I haven’t seen them live, the fact they have dirty puppets also performing kids’ parties is among the funniest things I’ve ever heard.   They’re great writers, even though I suspect they wouldn’t use the word “writer” to describe themselves.

Speaking of writers, while not puppeteers, there are two writing partners that constantly inspire me and the ideas we bounce around are starting to make it into some of my pieces.  First is Joe Goltz, the funniest human being, period.  He’s a musician and part of the comedy scene in Chicago.  But Joe and I have been friends since elementary school and it was scripts we wrote in radio and TV class in high school that not only got me suspended but made me really want to create for life.  Second is Lani Murray, who first came up with the idea of a dirty Bronte puppet piece.  I don’t think I’ll ever enjoy a relationship with someone 45 years older than me that is more raunchy or fulfilling.

M: What pieces do you have in circulation to perform in puppet slams?
EB: Hopefully the Bronte piece soon.  I think I’m going to retire the Russian sock puppets, at least for a while.  It might just bring up stressful memories of the TAG situation. I’m thinking of bringing back the dog chases from Stewart Little and making a new piece with them that has nothing to do with the book.  I’d like to remount and tour a puppet version I did of Marki Shalloe’s One Hand Clapping.  It’s a great short script about masturbating. And I’ve got a puppet I love that is a blue monster, with a cool way of working the hands.  But I just can’t make any material stick.  Maybe some day.   Also, it’s not my piece, but I’d love to see Nicole’s Chucky piece get a little longer and go on tour.  It is so well done.

M: Where can people contact you to perform?
EB: The best thing they can do is call or email me.  kolohepuppet@gmail.com or (808)457-9324.  I’ll probably screen the calls, so make sure to leave a message.

M: What is the future of puppet slams?
EB: I would really love to see some of our young puppeteers get to work the circuit nationally and bring back here what they learn.  And now that I’ve produced a slam I’d love to return to Atlanta where I was at best a fringe meteor to the puppet scene and watch the slams there with a whole new perspective.  As for the future of the Puppet Slam Network, I’ll probably look like an idiot if I make any predictions.

M: What advice do you have for up and coming slam artists just starting out?
EB: I’d tell them to give me advice.  I am making this shit up as I go and I really have no idea what I’m doing.

M: Anything else we should know?
EB: Don’t sleep with a raccoon in your bed.  You are always welcome to come here and perform, I’ll do whatever I can with my meager resources to help (also contact promoter Tim Bostock).  But don’t come here with a lame-ass I’m on vacation attitude.  Don’t bring rabies to the islands.