Deborah Hunt, curator of Sobre La Mesa Puppet Slam and co-curator of Noches de Cabaret has been performing with masks and puppets for the last 35 years. Originally from New Zealand, she has had the privilege of performing and leading workshops in many parts of the world. For the last two decades she has lived in Puerto Rico. 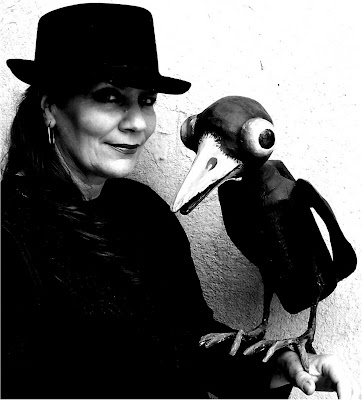 Marsian: How long have you performed at Puppet Slams?

Deborah Hunt: In 2008 I created a project called “Sobre la mesa”, a small format puppet challenge of tiny scenes inside a labyrinth of cloth. I gave each puppeteer the same object and suggested that we each create a 4 minute scene using the object as a point of departure. Each puppeteer has his/her kiosk and space for 6 people to observe the performance. At the end of the specified time music plays and the public move to the next kiosk.  As they are moving the puppeteer resets his/her piece to repeat it to the new audience entering the kiosk. This was my first slam.

M: How do your puppet slam pieces tie into the other kinds of puppetry, performance or your art-life at large?
DH: Sometimes I create pieces that then become part of other larger works….so in a way the slams are “breeding grounds” for further work. They give me a chance to experiment with a new technique, mechanism, or  personal challenge.

M: What inspired you to start hosting Sobre la Mesa and Noches de Cabaret?
DH: Well, I have talked about “Sobre la mesa”…which is now in its 9th edition. Generally it happens twice a year. Noches de Cabaret is an adult slam that is part of the Titeretada, which is our celebration of World Puppetry Day…we usually have events over a 2-6 week time period. We invite other puppeteers to present short pieces for adults.

M: Who exactly is “We”?
DH: ”We” is a committee made up of individuals or representatives of distinct groups interested in broadening the horizons for adult puppetry work (Papel Machete, Mary Anne Hopgood, Teatro Aspaviento, Y No Habia Luz and myself.)

M: How did you end up living in SanJuan?
DH: My ex husband.

M: I see… And what is the puppet scene like there?
The puppet scene is pretty much divided into 2 groups…companies that have been working a long time through within the education system and for children’s/family audiences,…and us…a coalition of individuals and companies dedicated to performing for largely adult audiences… we host the only puppet slams in town.

M: If you were to form a puppet slam circuit near you for touring, what slams/cities would this include?
DH: We live on an island in the Caribbean. So the closest place would be the Dominican Republic. We would love to create a Caribbean circuit…

M: I can think a lot of people would love that.. Please keep us posted! Why are Puppet Slams important to you?
DH: Here in Puerto Rico, the development of adult audiences has been extremely important to me and to my fellow collaborators. So the puppet slams are definitely a way of attracting both puppeteers and public interested in adult work. The slams give us a grand opportunity to experiment.

M: What inspires you to create a puppet slam piece?
DH: The shortness of time inspires me. To create a succinct piece that adds to an evening’s intrigue gets my juices going.

M: What pieces do you have in circulation at puppet slams?
DH: Personally, each year in the Noches de Cabaret Puppet slam, I perform as “Mission Educativa”, a character that basically forces everyone in the audience to make a puppet.

M: Where can people contact you to perform?
DH: maskhunt@gmail.com

M: Where would you like to see the Puppet Slam Network in the future?
DH: All over….the world

M: What advice do you have for up and coming slam artists just starting out?
DH: Just do it!
Posted by Marsian at 10:06 AM